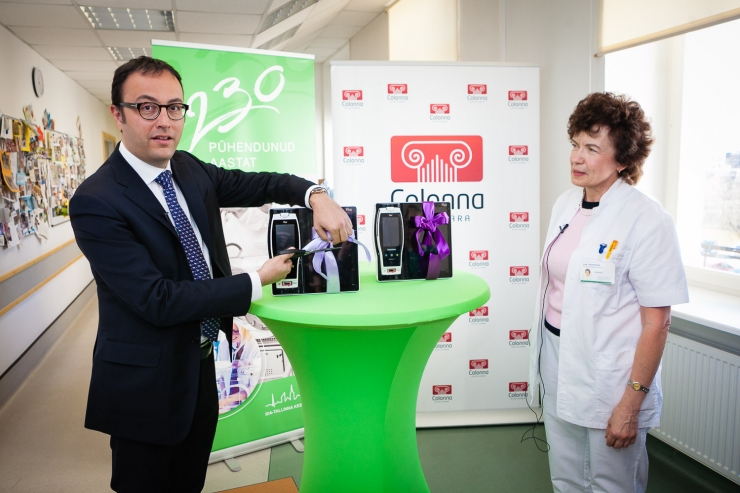 The devices that can be used to measure the oxygen content in the bodies of newborns, which were purchased with the help of the “Help Measure Life” campaign, were handed over to the Maternity Hospital of the Central Hospital on 30 March.

The charity campaign “Help Measure Life” was organised at the end of last year and raised funds for purchasing an NIRS device, which can be used to painlessly measure the oxygen content in the bodies and brains of newborns, for the Maternity Hospital of the Central Hospital.

People who donated by phone, Colonna Kinnisvara, the guests at the year-end gala of the company and major sponsors Inbank and Hansapost contributed to the purchase of the oxygen monitor for the Maternity Hospital of the Central Hospital. As there were so many good people who decided to help those in need and the amount raised was a little over 33,000 euros, it was possible to buy two oxygen monitors for the hospital.

The project for supporting newborns was the fourth one for the campaign leader Colonna Kinnisvara. “Our everyday work concerns long-term investments,” said CEO of Colonna Kinnisvara Roberto de Silvestri. “We also want to look into the future with our charity initiatives. Cooperation with maternity hospitals makes life better for the newborns as well as for all Estonia.”

Head of the Department of Neonatology at East-Tallinn Central Hospital Dr Pille Andresson says that the device is extremely important. “Measuring oxygen content in different organs is an important indicator for assessing the baby’s blood supply,” she explains. “Since oxygen is essential for life, we can say that we do measure life with this device.”

Using the NIRS method is an inseparable part of the intensive care of newborns. With the other monitoring methods, it creates all the possibilities for diagnosing and treating various diseases effectively. “In this case, it is important that the sensors are attached to the newborn’s body without causing them any pain, which allows us to avoid procedures that disturb the babies or cause them pain,” adds Dr Andresson.

The ceremony marking the end of the campaign was held on Thursday, 30 March, in the Maternity Hospital of the East-Tallinn Central Hospital.

The Maternity Hospital of the Central Hospital is the oldest and also the largest maternity hospital in Estonia. You can read more about the hospital online at www.sunnitusmaja.ee

Colonna Kinnisvara was established in 2006 and it primarily represents international investors, who have so far invested more than 250 million euros in Estonian property projects. The investors associated with the company own more than 80 properties by today. Colonna manages approximately 250,000 m² of rental premises in Estonia. Colonna participates in charity projects and supports culture and sports.